The Magic of Miracles 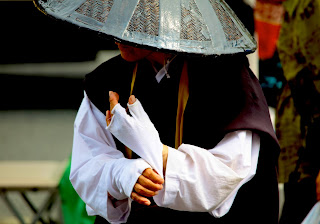 When you have been doing the writing, trying to be published thing for almost seven years, with no major successes, it gets a little discouraging. Every once and a while I get a subtle message that assures me that my writing is often inspired.

I did alot of research as I was writing Emergence. I scoured websites books and Google Earth among other things. I picked up a little tourist book about Japan and found in the Kyoto section, a picture of a Monk dressed just as I described him. I didn't know exactly what a monk would dress like but I thought I remembered something and went on that memory. Well it turns out I hit the nail on the head.

I know it was inspiration, there's no other way to explain it. Just realizing it makes it easier to keep going. I would be negligent if I didn't openly recognize it and voice my thanks.
Posted by C. Michelle Jefferies at 8:15 PM

Email ThisBlogThis!Share to TwitterShare to FacebookShare to Pinterest
Labels: writing...