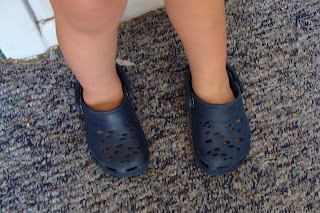 Some of you may know that two year olds can be a bit obsessive. Mine certainly is. We went school clothes shopping for four out of the six children at the local supercenter a few days ago. So as we are looking in the shoe section i pick up a pair of crocks for my littlest one. He needs a pair that are easy to get on and we lost one of his velcro tennis shoes.

This is where the problem started. He LOVES them not just "these are cool thanks mom" love no obsessive love. He danced and played in them all evening after we came home, he would lay on the floor with his feet up in the air looking at them. When I put him to bed that night he cried untill I put his shoes in the crib with him. he gathered them up and laid on them. That next morning I went to get him out of his crib and they were allready on. Night before last, he cried untill I put them on his feet. Last night I didnt bother to take them off. SIGH!

As I post this he is in the bathtub with them on his feet.

My two year old is definately a source of comedy in our house.
Posted by C. Michelle Jefferies at 8:36 AM

Email ThisBlogThis!Share to TwitterShare to FacebookShare to Pinterest
Labels: life...

Noble is very funny. He will sing to them too. In fact he is doing that right now... :)

That's funny. My fifteen year old still remembers a pair she had when she was two and tells me I should have kept them. Kids are strange sometimes.

My youngest is the opposite - always wanting her shoes off. Is Noble two already? And walking! I can't wrap my brain around that one...must have been awhile since I last saw him.

When I was a teenager, I had a pair of deck shoes that I almost felt that way about! My mom kept trying to throw them away and I kept rescuing them. They were half duct tape, and were drawn on and worn out, but the soles were still good.

Hey Michelle! I didn't know you had a blog! I saw you commented on Kate's blog, so I had to check yours out. Noble is so funny! Owen has the same shoes, they are the best ever for little ones. I wish Owen sang to his, though. That would be cute! This blogging will be a fun way to keep in touch and check in on you guys when we move to Las Vegas....which should be in the next week or two.
millerrubbish.blogspot.com