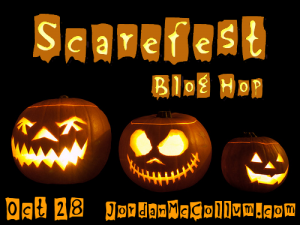 I was supposed to post some information on this but my day was so busy I just posted the excerpt and kept telling myself to go back and fix it. So here is the revised post.

Jordan McColum is hosting a scarefest with the theme of fear. I have some pretty scary scenes so I thought I'd go for it.

This is a scene from my story Intercession. I'll warn you this was a NANO project and is really rough. I apologize.

The scene opens where Dacias a vampire is chasing a human on Halloween night.

The man looked back and with a grin he turned down Garret Street, a small side alley lined with bars and whore houses. It would be easy for him to slip away in any of the darkened doorways.
Not if I can help it.
Dacias pushed himself forward increasing his speed, grabbed the man by the shoulders and spun him around.
“Whaddaya want with me?” the man asked. His once smooth ponytail now hung in greasy strands around his shoulders. He panted and looked at Dacias, one of his yellow contacts had shifted to the right and he blinked to settle it again. A fake vampire fang now hung by a string of adhesive from his incisor. “I didn’t do anything.”
“Right,” Dacias said. “I’m sure that girl would disagree with you.”
“Girl? What girl?”
“the blonde woman dressed in the fairy costume, I’m sure she remembers every terror filled second with you.”
“T…the fairy, oh her. She was like that when I found her.”
“When you found her? Then why’d you run?” he grabbed at the man’s had that held the straight edge. “What’s this for then?”
“I. . . uh found it next to her, and . . . I wondered what it was.” He startled as the tooth fell hitting his shirt before falling to the ground.
“You know what I really hate?” Dacias said as he took his finger and bent the blade of the straight edge down against the man’s hand. “I hate someone who impersonates a vampire. You guys have it all wrong. We’re nothing like the old legends make us out to be. You push a stake through my chest and you’re just going to piss me off, even more when you think that vampires drain a body. Just how big do you think my stomach is?” He paused watching the man’s face. He’d seen better vampire costumes. He wondered why his friend Elias invited so many humans to his annual Halloween party anyway. “You know what I hate even more? I hate someone who blatantly lies to me.”
“I . . .I” the man stuttered. Dacias smiled, smelling the adrenalin rush through his blood. The aroma similar to hot sugar, it made him think of his mothers cinnamon rolls.
“A . . . are you scared yet?” he mocked letting his fangs slide from his gums. The man’s pupils constricted into tiny pinpoints. “Yeah you thought we really didn’t exist did you. Thought it was cool to mock my race. Even better to let a woman bleed to death as you sit at home in agony with a belly full of blood.” He pulled the man’s head sideways and opened his mouth. He suppressed his calming pheromones, the ones that normally let his victims fall into a peaceful stupor as he fed and not remember a thing afterward.
“This is going to hurt.” He said and plunged his fangs into the man’s flesh.
Posted by C. Michelle Jefferies at 11:45 AM

Really GOOD! Even in the NaNo rough! I love the line about pushing the stake through his chest and he's just going to be p'd off!