"The Cleansing of America" by W. Cleon Skousen 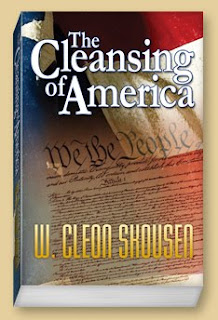 To be honest, I offered to read "The Cleansing of America" because I am a fast reader and they needed to fill their review list quickly. I learned a lesson though, this book is not one that can be read quickly. Not only is it filled with many scripture references and study questions, but the material covered in the book is so amazing you want to take your sweet time reading it and understanding what Mr. Skousen offers. Written as one of four unpublished manuscripts before his death three years ago, “The Cleansing of America” deals with what has caused our dear country to come to the state of moral degradation it is in now. Then goes on to discuss what both modern and ancient prophecy tells us will happen in the last days.

While I tend to avoid thinking about the end days and prophecy because it scares the bejeebies out of me, this book was a source of comfort and helped me understand what is going to happen and why. I would recommend this book to everyone. It should be required reading for those who love this beautiful country.

I believe Valor has, with the acquisition of these last four manuscripts of Mr. Skousen, placed themselves in line to compete with the “Big Guns” of LDS publishing. I commend Valor for this move and look forward to seeing Valor succeed. 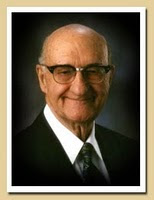 W. Cleon Skousen (1913-2006), an ardent supporter of God, country, and the unlimited potential for greatness in all people, passed away at his Salt Lake City home on January 9, 2006, of natural causes incident to age, just eleven days shy of his ninety-third birthday. He was lovingly surrounded by many family members, and Jewel, his wife of sixty-nine years.

Dr. Skousen was the author of The Making of America, and was known by millions for his devoted understanding and support of the U.S. Constitution, his love of the gospel of Jesus Christ, his insights into politics, religion, good government, and human nature. He leaves behind an exhaustive work of scholarship created over three-quarters of a century and covering dozens of specialties. Among his 46 books he wrote are the bestsellers, The Naked Communist, The Naked Capitalist, So You Want to Raise a Boy, The Five Thousand Year Leap, and Fantastic Victory about the Israel-Arab war of 1967.

His books on religion, such as The First 2,000 Years, Prophecy and Modern Times, Isaiah Speaks to Modern Times, Treasures from the Book of Mormon, and Days of the Living Christ, reached millions of readers in the Christian, Jewish, and Islamic communities.

His speech entitled "A Personal Search for the Meaning of the Atonement" is perhaps the most widely distributed CD among members and missionaries of the Church of Jesus Christ of Latter-day Saints-a fact that made him smile in astonishment. "I've had missionaries tell me that speech has been translated into Russian, Spanish, Portuguese, and French, and has been passed around on every continent where missionaries serve."

Skousen served sixteen years in J. Edgar Hoover's FBI as an agent and the communications director during the waning years of the gangster era and WWII. He also was the editor of the nation's leading police magazine, "Law and Order."

He was a popular teacher of several thousand students at Brigham Young University for sixteen years, and a highly respected speaker across the country where he sometimes gave as many as 300 speeches a year. His devotion to America's Founding Fathers and the Constitution led to the creation of "The Freeman Institute," later known as the "National Center for Constitutional Studies," an organization through which his speeches and writings educated and united large segments of voters to elect senators, congressmen, governors and presidents who loved the Constitution.

Known for his untiring devotion to principle and integrity, he served as Salt Lake City's chief of police and created what Time Magazine called "A model police force." After four years of service, the city mayor created a firestorm of protest when he fired Skousen on trumped-up charges, an event the mayor later called the worst political mistake of his life.

Skousen and his wife maintained a modest home in Salt Lake City that became a stopover for any person with political aspirations in Utah and beyond. Friends and visitors included ecclesiastical leaders of all faiths, politicians from each major parties, students of all ages, and of course, the local missionaries, every Sunday night.

Skousen was born in Raymond, Alberta, Canada on Jan. 20, 1913, and was educated in Canada, Mexico and the U.S. He served a two-year mission for the LDS Church at age seventeen. He earned his PhD at George Washington University. He and Jewel are the parents of eight children, 50 grandchildren, and 100+ great-grand children.

Just before Dr. Skousen died, he completed the manuscript of Cleansing of America. He asked his sons to hold on to this manuscript until certain conditions were met. His sons feel the current climate of America meets their father's conditions and are thrilled to release this previously unpublished work of the man who was affectionately known as "a living national treasure."

Days of the Living Christ, Volumes 1 & 2
Fantastic Victory
Majesty of God's Law
Making of America
Prophecy and Modern Times
So You Want to Raise a Boy
The 5,000 Year Leap
The Naked Communist
The Naked Capitalist
The First 2,000 Years
The Third Thousand Years
The Fourth Thousand Years
Treasures of the Book of Mormon, Volumes 1-4
Posted by C. Michelle Jefferies at 1:15 PM

I had no idea that this book spoke of the end of days. I'll have to check it out because I've recently been studying about this. Thanks for the great review, Michelle!

Ok, I'm frightfully curious. At the top of this review you have a link to info for purchasing an AUTOGRAPHED copy. How is that possible with a posthumously published work??

LOL it will be signed by one of his sons. Sorry for that creepy omission. Wow talk about not thinking about what you are saying.

Great review, Michelle. It sounds like a powerfull book.

Noble M Standing said...
" LOL it will be signed by one of his sons. Sorry for that creepy omission. Wow talk about not thinking about what you are saying"

How disappointing. I was hoping for an autographing for the dead ceremony in the Salt Lake Temple.